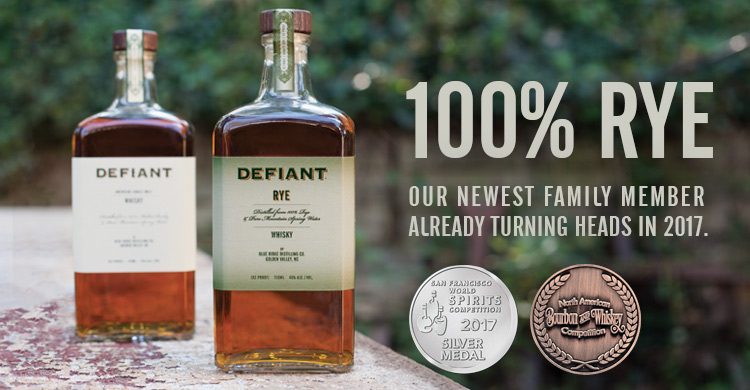 Golden Valley, N.C. (October 18, 2017): Defiant Whisky is proud to introduce the newest member of the Blue Ridge Distilling Co. family, Defiant Rye. Already proving a force to be reckoned with in the world of whiskies, the 100% Rye has won multiple awards in 2017, including silver medal at the San Francisco World Spirits Competition, bronze medal at the North American Bourbon & Whiskey Competition, and bronze medal at Tasting Spirits.

For those not familiar with Defiant Whisky, the distillers took risks from day one to redefine the process and it paid off big time. Choosing to defy the odds once again, this time they took on Rye. Working with Rye is a challenge due to its temperamental characteristics. In true Defiant spirit, the distillers said challenge accepted! “It was a natural curiosity for tackling the hardest grain to lauder”, says the Defiant team. “We gave it a shot because that is what we like to drink, and very few people make 100 percent rye whisky.” The distillers continue to push boundaries, creating an end product of the elusive spirit that is bold, edgy and DEFIANT.

Defiant Rye launched this month across North Carolina and can be found at most ABC stores within the state. Don’t see it on the shelf? Simply ask the store to place an order. Whisky enthusiasts can also pick up a bottle in-house at the Defiant store. Blue Ridge Distillery is open for tours Monday through Friday, giving visitors the opportunity to dive deeper into how the whisky products are made and even try a sample or two.

Defiant Rye Whisky is a product of Blue Ridge Distilling Company. For more information about Defiant Rye Whisky or to schedule a tour of the distillery, please call 828-245-2041 or email info@blueridgedistilling.com. For media inquiries, please contact Heather Meech at 828-286-9977 or heather@mcconnellgrouppr.com.