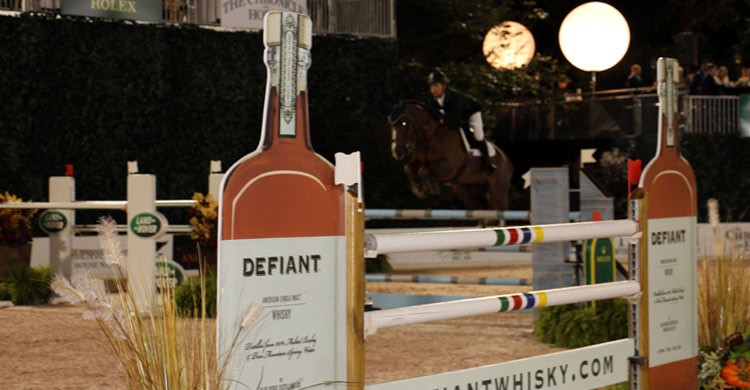 Defiant Whisky is playing with the big dogs, or horses that is. This craft spirit, made in the foothills of the Blue Ridge Mountains, is proving that it belongs in the category of “best whisky,” having won multiple awards including the silver medal for the 2015 Craft Spirits Competition and bronze at the San Francisco World Spirits Competition. From The GRAMMYs and NYC Fashion Week and now as the featured whisky of the Central Park Horse Show, Defiant Whisky is winning fans and taste buds around the country.

The Rolex Central Park Horse show will host the inaugural U.S. Open for equestrian sport, the only event of its kind ever held in Central Park, set to take place Sept. 23 – 27, with North Carolina’s own Defiant Whisky as the official spirit sponsor. Defiant will be available in all stadium bars, have two VIP tasting booths onsite and Defiant will even be featured during the show itself – in the form of a horse jump consisting of larger-than-life Defiant bottles. As the name would suggest, they’re built for great things.

Defiant Whisky Founder Tim Ferris has worked many times in New York City, though usually in a much different capacity – through his salvage diving company, Defiant Marine.

“We are continually amazed by our relationship with New York City, from pumping out the subway system after hurricane Sandy, to now our involvement with the Central Park Equestrian show. And we are grateful that New Yorkers have embraced Defiant American Single Malt Whisky as their own,” said Ferris.

For Defiant to be sponsoring one of the greatest upcoming equestrian competitions in the world speaks not only to the superior quality of the spirit itself, but to the ingenuity of North Carolina as a state; it’s not just home of the “First Flight” anymore. Click here for more information on the Rolex Central Park Horse Show, or click here to see a clip from last year’s show.

The Rolex Central Park Horse Show is not the only premier event where Defiant will be
turning heads and staking its claim. Defiant’s one of a kind taste and character has entitled them to attend several upcoming national spirit events including Whisky Fest New York and San Francisco, Whisky of the World Series in Texas and Taste of Savannah in Georgia, all distinguished affairs that have not typically featured craft distilleries in the past.